Dr. Grantham is a faculty member in the Department of History and Political Science at North Carolina A&T State University.  She is a Digital Learning Faculty Fellow at the University this summer.  This article includes part of her research about the impact of technology on African Americans.

No longer!  We will no longer tolerate a lie when our cell phones record the truth. Racism is the ugly reality that slaps us in the face as the world watches an 8 minute and 46 second video of a black man being suffocated by the police. The various cell phone videos reveal more than the agitated bystanders’ perspectives—the cameras reveal the Minneapolis policemen’s motives.

We see the Minneapolis policemen and Cooper hatched a plan. A bigot knows what to say, what buttons to push, and . . . how to destroy a black man.

We are in the digital age . . . the third modernity. It reveals the truth—racism.

In this nation’s history, white supremacists used the same tactics over and over . . . because these tactics continued to work.  Lying, coercion, intimidation, rape, beating, and . . . lynching. Rulings were based on the testimony of witnesses (white witnesses). Now, we see the truth revealed—we won’t need witnesses to see criminal intent in the court of public opinion.

Cell phone technology calls into question every accusation made against a black man in the past. Was Kobe Bryant innocent of rape? Why was he forced to pay the white hotel employee who accused him? It was his word against hers. No video—no proof.

In 1989, Charles Stuart of Boston alleged that a black man killed his pregnant wife. No video—no proof. The city exploded as police searched for African American suspects. Later, we learned that the accuser, Stuart, murdered his own wife. His lies were premeditated (and inexcusable) arousing the entire city to demand revenge . . . any black man’s blood.

Why are we so mad about George Floyd? This abuse represents more than the murder of an innocent black man. Demonstrators are fed up with the history of lies told against black men who could not prove the truth. The world watched in horror as the police snuffed out a man’s life . . . George Floyd and bystanders BEGGED the cops to just let him BREATHE. Why was it too hard to move off his neck?

Derek Chauvin would not give mercy to a tall black man. Hearing pleas for mercy hardened him. Putting his knee on a larger man’s neck empowered Chauvin to show his audience that he’s the alpha male. With the help of the other three policemen, Chauvin (5’9”) proved that he could subdue a bigger man (6’7”).

Chauvin calmly showed the world that he’s in control . . . not the onlookers . . . not George Floyd. Chauvin’s motive is undeniable, “See how big I am.  I can hold this large black man down with one knee.”

Similarly, in the Central Park incident, Amy Cooper yelled, “I am going to tell the police that a BLACK man is harming me.” Not just a MAN but a BLACK man.  (We are not so naïve enough to believe she came up with that idea on the spur of the moment). To Kill a Mockingbird (1960) by Harper Lee provides an example of a white woman using the same tactics.

Cooper knew how to manipulate the police and even how to escalate the situation by acting panicked and saying BLACK MAN. She knew history was in her favor. The cameras reveal the truth—motive.  Her apology is meaningless.

If Chauvin (and his family) or the rest of the bloodthirsty cops intend to apologize, I DO NOT WANT TO HEAR IT! After such a vicious, premeditated action, an apology is just an insult. It’s pathetic! Their apology is another way of gloating, and it might provoke more violence.

I am still wondering why . . . just why did it take so long to charge Chauvin? And, why did authorities delay charging the other cops? Did you see all of the videos . . . all of the different camera angles? Look at the two policemen restraining Floyd’s back and legs. Look at the way Thao retains the crowd, and even threatens with mace. Defiant, he dares them to risk helping Floyd.

The Minneapolis policemen can’t deny what we saw; the camera exposes their lies.

Do we forgive? Turn the other cheek? Should we cancel their debts and let them go free?

I pity the helpless Good Samaritans. They could not do anything because their lives and safety would be in jeopardy. All pleaded in vain while watching Floyd die.

Spiritual people claim when a person is dying, they see their loved ones in the spiritual realm and begin to call to them. Moments before Floyd died, he called for his mama to help him. His mother died months ago. I would like to think that she did help him, and that they are both at peace. Rest in peace, George Floyd. Be at peace.

As for us, we will mourn him. We will demand justice. And, we will try to find the faith to go into the world again. 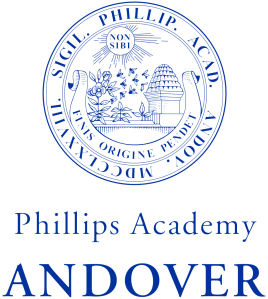 Founded in 1778, Phillips Academy is an independent, coeducational secondary school with an expansive worldview and a legacy of academic excellence.